Uncontested vs. Contested Divorce: Which One Should You Choose? 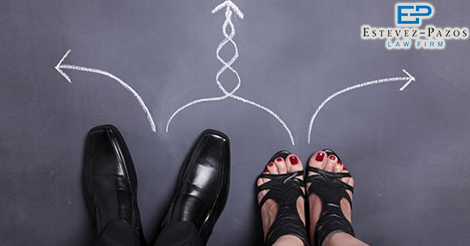 By the time a couple decides to divorce, they have usually been experiencing difficulty in their marriage for some time.

Comparatively few couples can automatically agree on all the issues in their divorce case right off the bat. Just because you disagree on some points, however, doesn’t mean you will end up with a contested divorce.

Dissolution of Marriage in Florida

Although most people use the term “divorce” to refer to the breakdown of a marriage, divorce is actually called a “dissolution of marriage” in Florida.

Because Florida is a no-fault divorce state, neither spouse has to prove either was responsible for the end of the marriage. To get a dissolution of marriage in Florida, you only need to show that the marriage is “irretrievably broken”.

To file for a Florida divorce, you must also satisfy Florida’s residency requirement, which mandates that at least one spouse must have lived in the state for a minimum of six months before filing the divorce petition.

Contested or Uncontested: Which One Should You Choose?

If you can’t agree on everything, you must file a contested divorce. In most cases, the parties and their lawyers continue working toward a resolution of all the issues up until trial.

The good news is that relatively few contested divorces end up being tried in court. Fortunately, even contested cases tend to settle.

Advantages of an Uncontested Divorce

An uncontested divorce offers many benefits. When you and your spouse agree from the beginning, you can circumvent much of the emotional and financial strain associated with contested divorce.

In general, you can expect the following in an uncontested divorce:

When people decide to end their marriage, many just want the process to be over with as quickly and painlessly as possible.

An uncontested divorce still requires both parties to work toward an amicable resolution, but it is generally much less time-consuming than a contested case.

An uncontested divorce is generally a much more economical option.

Uncontested divorce may sound like an attractive and reasonable option, but it’s not always the best option for everyone.

In some cases, going the contested route is the best way to resolve the case fairly. Perhaps one spouse has good reason to believe the other is hiding assets.

Get Advice from a Miami Divorce Lawyer

Most people struggle with the decision to divorce. It is a big step for anyone. Fortunately, you don’t have to make these decisions alone.

A Miami divorce lawyer can help you determine whether your case can be resolved with an uncontested divorce. Your lawyer will assess the facts in your case and help you decide which path is best suited for your situation and your goals.