Can I Get Sole Custody of My Child After Divorce?

Are you waist-deep in divorce and looking for sole custody? When the custody of your kids is on the line, self-representation isn’t always the best option. 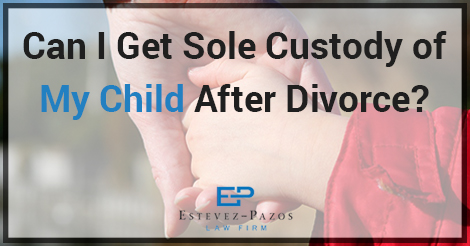 The most sensitive issue in divorce proceedings is the subject of child custody. As a parent, your first priority in this situation is determining your children’s best interests.

Working with an experienced Miami family law attorney might be all the help you need to protect your family’s interests.

“Custody” itself doesn’t really exist in the state of Florida; instead, it is referred to as parental responsibility. This is when one parent has absolute discretion to make decisions regarding the life of the child without input from the other parent.

While sole custody may look appealing for some divorcing couples, it is difficult to get such an order granted by the court.

The most common types of cases that grant sole custody to one parent over the other is if there is viable evidence of neglect or abuse.

Continue reading below to learn more about these types of situations…

How the Florida Courts Work

These are to be shared based upon the Parenting Plan agreed upon between the separating and divorcing spouses.

Cases in which the parents can’t come to an agreement on the plan or if the court deems the plan isn’t in the best interest of the child, then the judge will institute a different plan into the divorce decree.

It’s up to the judge’s discretion to award sole custody to one parent over the other. They can also allow or deny visitation rights based on what is in the child’s best interest. These determinations will be outlined in the court’s order.

The courts, guided by public policy enshrined in Florida Statute 61.13, lean more in favor of ensuring both parents are present in the life of the child.

This means getting sole custody is very difficult. While most parents would like sole authority over the decision-making and time-sharing responsibilities, realistically, getting such a decree in court is almost impossible.

Based on previous cases, the courts have shown reluctance to rule in favor of awarding sole custody to one parent over the other. Typically they only allow this route when its alternative, shared custody, would be to the detriment of the child.

These scenarios are seen in extraordinary circumstances where strong evidence is put forward showing such time-sharing would be harmful to the child.

Things such as cases of domestic violence, child abuse, neglect and abandonment are all grounds for sole custody. The evidence must be convincing, absolute, and decisive.

In determining custody, the courts take into consideration a list of factors that can sway their decision one way or another.

Some of these factors include:

If you are in a custody battle and have evidence of any of these factors, share it with your Miami family lawyer. It may be the missing link to a successful sole custody verdict.

If an order for sole custody has been given by the court, then the other parent may reopen the case later for modification.

Despite the initial ruling, the courts will always be inclined to lean toward having both parents in the child’s life. The evidence brought before the court will be crucial.

There are ways to discourage the other parent from seeking a modification to the court’s custody order. These can be in the form of substantial evidence implicating the parent as dangerous or provisions in the initial custody plan that trigger financial conditions if the case is ever reopened.

If all fails, you can have your Miami family law attorney push the case to a dependency court. This is a complicated procedure involving several legal steps.

The Ultimate Case with a Miami Family Law Attorney

In terms of determining custody and parental responsibilities and time sharing, the question stands to be: What are the best interests of the child?

The simple answer is each custody case is different, and each child has different needs. Sole custody rulings are possible, but extremely rare..

Find a knowledgeable Miami family attorney who understands the complexity of divorce cases and your need to protect your child from harm.

By having an attorney assess your case, you will be aware of all avenues open to you, and determine which route is in your and your child’s best interest.