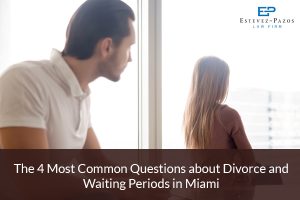 The last thing anyone wants is for a divorce to drag out over time. Once a couple has decided to get a divorce, both parties most often want to settle any differences they have in property, custody and finances and move on with their lives as quickly as possible. Like every other state, Florida has rules and regulations that determine the process for finalizing a divorce, which affect the time that passes from making the decision to divorce to the filing becoming official.

What Are Grounds for Divorce in Miami?

Florida will grant a divorce under the following circumstances:

The former is what a majority of divorces are based upon. If you are seeking a divorce based on the grounds that your spouse is mentally incapacitated, it’s important to note that this incapacitation must span a period of at least 3 years prior to filing.

How Long Must I Wait if My Marriage Is Uncontested?

The only wait period that Florida has in terms of filing for divorce is a requirement that one spouse must be a resident of the state for at least six months before filing for a divorce. Once you file for a divorce, however, the length of time it takes to finalize the divorce is dependent on a number of factors.

On the extreme low-end, a divorce in Miami will take at least three weeks to finalize. This will only occur if both spouses agree:

This doesn’t happen too often, especially in cases where children and custody are involved.

How Long Does a Contested Divorce Take?

Contested divorces occur when spouses don’t agree specific details of the divorce, whether it be the marriage is irretrievably broken, property or finances are contested, or there is a custody dispute. Depending on the complexity of your divorce case, and whether the issues can be resolved quickly and painlessly, a contested divorce could take six months – or more.

In addition to the three-week wait from the period of filing, a judge in Miami may also mandate:

Divorce proceedings can be further complicated if one spouse can’t be located or reached easily, or if both parties can’t come to a final agreement on the division of property, assets and/or custody on their own.

Getting a divorce in Miami can be a complicated, confusing and stressful process. Make sure you have all the knowledge and help you’ll need by contacting the Estevez-Pazos Law Firm today at (305) 717-7130.