The Connection Between Social Media and Divorce in the United States 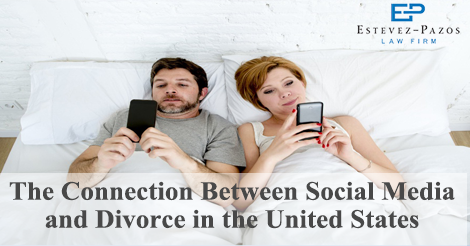 As you probably already know, the majority of people have a smartphone including you, are connected to some type of social media on a regular basis.

It becomes a part of your routine and it’s a great way to keep up with other individuals in your life.

Sometimes people even turn to social media to get advice or to share their frustrations with their life, but this could be problematic if you’re going through a Coral Gables divorce.

Social media has even been linked to a higher chance of getting divorced in the first place.

When it comes to divorce, however, sharing too much information on social media could create a trail of evidence that could be used against one or both parties and ultimately impact pertinent divorce issues like child support, child custody, and even spousal support.

Make sure you think twice before posting on social media.
Read on to learn more about how social media can be connected to your Florida divorce.

If you are thinking about filing for legal separation, contact an experienced Florida divorce attorney today to learn more about how the process works and what you can expect if you decide to move forward.

While most people certainly don’t go as far as to list their annual earnings on social media, they find many other ways to brag about their financial success.

If someone alleges that they have a low income in order to avoid child support or spousal support payments, however, but shows lavish purchases or extreme vacations on social media, this could be dragged up and used against him or her in court.

This can even happen if you have blocked your spouse from viewing your social media. Other friends may be able to see what is posted.

This is something to be aware of for both individuals involved in a divorce as a record on social media could be used to refute evidence being shared in court.

Also Read: Financial mistakes you should avoid during divorce

Did you know that text messages and email can be subpoenaed and they can be admissible in court?

If one individual reveals something via text message or email that hasn’t yet been revealed in the Florida courts, this could be used as evidence that the individual is not being honest about financial declarations.

Social media is connected to divorce, it can be extremely challenging when you’re going through a legal separation where child custody is a major issue.

If you are posting pictures of parties or being out during times when you’re supposed to have been with the children, for example, this evidence could be entered into custody.

Although it is certainly something that you might hope may not come up in your child custody issues in court, you should never rely on social media as the appropriate place to air any private information about your children.

Protecting Yourself from the Negative Impacts of Social Media

the best way to avoid social media becoming involved in your divorce case at all is to avoid using it.

It may be difficult to break your habit but taking a temporary break from social media will give you the opportunity to focus on starting your own beginning anyways.

What If I Think Social Media Could Be Used to Help Support My Side of the Story in Court?

You should discuss your overall divorce strategy with your Florida divorce attorney to determine whether or not social media may be a component of this.

It is important to understand that each individual case may benefit from different strategies and tactics and that you should consult with your attorney before moving forward with anything.

Social media can be a double-edged sword, however, as opening this as a source of evidence could mean that your social media is used against you, too.

An experienced Coral Gables divorce attorney can tell you more about what you can expect in the process of filing for divorce.

Social media records can be extremely maddening when you’re already going through the emotional distress of getting divorced.

It may be best to take a break from social media while your divorce is being processed and finalized.