Happier Marriage May Be More Likely with A Female Breadwinner 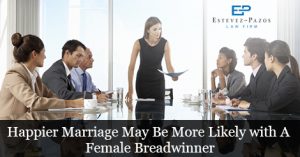 A new research study identifies that women in the role of breadwinner will be more likely to experience a stronger marriage.

One of the leading reasons for divorce as theorized by sociologists in the last several decades has to do with the changing role of women. More women are working outside the home or attempting to juggle their responsibilities within the home while also having a job outside.

One of the leading trends impacting marriages and divorces today has to do with the shifting gender roles of men and women.

According to some new research studies, the fact that more women are independent and financially secure may lead them to make the decision to get a divorce more so than in the past.

If you were thinking about moving forward with a divorce, it is essential to consult with an experienced divorce attorney immediately.

Many divorces contain complex issues including child custody, child support, child support, division of property, and other issues that need to be evaluated by a knowledgeable lawyer.

Why Marriages Tend to End

There are many different reasons that a relationship can end in divorce, but you may be able to increase the odds of a having a long and happy marriage by having a female breadwinner in the house.

Many past research studies have looked at all kinds of aspects of male and female employment and how this influences relationship’s success. You might have already seen the study that shows that a happy marriage requires aspects like job security.

Also Read: Time for a Divorce? Here Are Some Ways to Tell…

Does the Breadwinner Matter?

However, there are numerous other elements that can influence a relationship and can even cause a strong marriage to eventually derail and fall apart.

New research from the University of Connecticut points out that being the breadwinner can be unhealthy for men and put too much pressure on them.

Throughout U.S. history, the man has primarily served in the role of breadwinner, but the research project presented at the most recent meeting of the American Sociological Association found that men who had the primary load for financial stability and well being in their families had the worst health outcomes than their counterparts.

What the research study found was that the more that a wife contributes to the household earnings, the better off the husband tended to be physically. This is the most recent study to explore gender expectations and how it influences marriage and divorce in the United States today.

Also Read: Where Should You Turn for Your Family Challenges?

While many other studies about how gender roles influence marriage look at the ways in which women may be at disadvantage, this new study contributes to an increasing body of research about the ways that gender expectations can have negative repercussions for men as well.

Breadwinning, however, had an opposite impact on women. As women made more economic contributions to the household, their psychological well-being improved.

Given that money is one of the biggest triggers for disagreements between spouses, this new study presents interesting research results that help to explain how women contribute to modern households and how this can influence both gender roles within the marriage as well as factors for divorce.

If you have been thinking about getting a divorce in Florida, there are likely many different questions that you need to have answered prior to moving forward with the official legal process.

Consulting with the right Florida divorce attorney is strongly recommended for anyone who is contemplating divorce.

There many different things you need to consider if you are contemplating going through a divorce in Florida, but a knowledgeable attorney can help you significantly.

Having an opportunity to have your questions answered sooner rather than later give you a better understanding of what to expect as the divorce process unfolds in Florida. The right lawyer can give you peace of mind that someone is looking out for your best interests.

Learn more about how unemployment can condtribute to divorce likelihood: https://www.mepfamilylaw.com/research-study-pinpoints-unemployment-as-divorce-predictor/