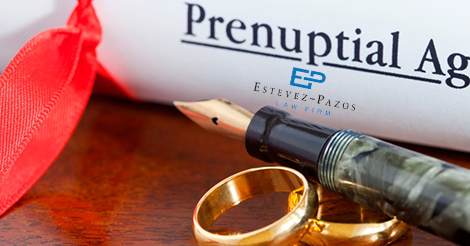 Prenuptial agreements are commonplace in Miami, as they are in many parts of the country. People looking to marry are always looking for security.

With the divorce rate in the US hovering around 50-percent for the last couple of decades, it’s clear why a prenuptial agreement might be necessary.

Even for couples who think they’ll be together forever, divorce is always possible. What do people put in these agreements? As lawyers in Miami will tell you, most of these agreements are fairly standard, covering the financials that matter most to marrying parties.

Here are 10 common things that you’ll see in Miami prenuptial agreements if you spend any amount of time studying them.

1. Division of pre-marital assets and debts

Perhaps the most important concern for marrying couples is what to make of pre-marital assets and debts. A prenuptial agreement will answer the question of what happens to these pre-marital items when the marriage ends.

Will a person’s debts and assets be co-mingled with marital property, allowing for an equal division of all assets? Will pre-marital assets and debts be kept separate in the case of a divorce?

In marriages where one partner enters with significantly more assets than the other, it’s routine to keep these separate. A person who is extremely wealthy will often look to protect those assets from common property division in the case of a divorce.

It’s typical in the modern age for one party or the other to bring some debt into the marriage. If a person has $100,000 in student loan debt, for instance, and that debt is paid by the other partner with pre-marital assets, will the person who was in debt have to reimburse the person who helped pay off the debt?

Under traditional marriage rules, there would be no reimbursement requirement. This is why pre-marriage agreements are so critical.

3. Pre-marital money is used to buy a joint house

Imagine that a couple purchases a home. In some cases, they’ll buy that home with money that one partner earned before the marriage. Pre-marriage agreements dictate how this will be handled.

Will the partner who did not bring assets into the marriage receive joint ownership in the house as a gift? Or will that partner need to reimburse the asset-holding partner when the marriage is over?

Without an agreement, income earned during the course of the marriage will be joint marital property. If one partner earns $10 million during the first year of marriage, each spouse will have a 50-percent claim to the money.

This can be altered by an agreement, however. In many cases, high-earning Miami couples will reach some agreement on the division of assets earned during the marriage.

Also Read : 5 Ways a Prenuptial Agreement Can Protect You

5. Who will act as the financial manager?

Financial issues rank as a top cause of divorce. With this in mind, some couples use their pre-marital agreement to determine who will serve as the financial manager.

Will both individuals have a say in things? Will one act as the primary financial manager? Will it be a situation where the couples outsource the financial management to a professional? Agreements can lay out these expectations.

6. How will major purchases be handled?

Along those same lines, pre-marital agreements can often lay the ground rules for how couples will handle their major purchases. What will the process be for purchasing a home? Can one person decide unilaterally to buy a boat?

One of the upsides of a pre-marital agreement is that it’s not necessarily bound by law. Individuals get to create their own law through the contract itself.

It’s not unusual for people in Miami to go through multiple divorces. This means that financial responsibilities from other marriages can become a major issue in some instances.

One of the major questions that these agreements will seek to answer is how child support or alimony payments from previous marriages will be handled. Will that money come from joint funds?

Will the partner who owes the money have to pay it from his or her own pre-marriage assets? These are the critical questions often addressed in these agreements.

It is typical for spouses to have different credit histories and capabilities. Many pre-marriage agreements will outline the ways the new couple will seek credit.

It might be necessary for one partner to not sign on as a joint borrower on new credit obligations. If the wife has pristine credit and the new husband has poor credit, for instance, having one partner sign for a car loan will work out better for the couple.

The courts have traditionally been very willing to impose rigid spousal support and child support requirements for men and women who work.

Some pre-marriage agreements can help to clarify or limit spousal support. For couples who think they might eventually split, it can be necessary to lay some up-front rules for what limits might be on various forms of support.

10. Duration of the agreement

Many couples will put into place a section outlining how long the agreement will run. What might be true in 2016 may not be true in 2046.

Estevez-Pazos Law Firm understands the difficulty of putting together a proper agreement before marriage. In Miami, it’s critical to have all of these things lined up to relieve the difficulty that can come with divorce. Though no couple expects to divorce, they should have an understanding and appreciation for the process.